Wow!  I've been back to running since I had the baby 8 weeks ago and it is tough!  I feel like I did when I just started running for the first time ever.  I was overweight, led a sedentary lifestyle and never ran in my life.  From there, I walk/ran until I could comfortably run a 5K.  I remember when running 3 miles seemed so unattainable.

Less than two years after I started running, I ran a full marathon.  The beginning of 2012 was my best racing yet - a 5K PR in Feb (Super Bowl in Novi), 10K PR in March (ShamRock N Roll in Plymouth), and 3 half marathon PRs shortly thereafter (Rock CF in Grosse Ile, Martian in Dearborn and Let's Move in Mt. Clemens).  5 races, 5 PRs and I was on my way to train for my second full marathon and hopefully take 30-45 mins off my time.

Then I got pregnant, was diagnosed with placenta previa, and told not to run.  Man, did my free time really open up.  I stopped running mid-July and only just atarted again mid-Feb, just 3 and a half weeks after my daughter was born.

In a random turn of events, my mom found a like-new treadmill in my grandpa's basement at the same time I was looking to buy one... Three days later a treadmill arrived in my living room.  Thank goodness too, since I was not able to get outside to run as much as I thought I would be able to with a newborn. 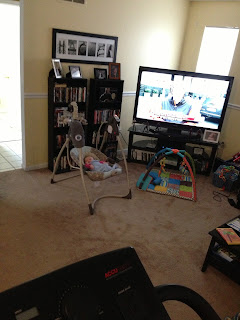 my view from the loud treadmill - sleeping baby girl and tv I can't hear and apparently our closed captioning doesn't work...

For the past two weeks, I've been slowly but surely increasing my mileage, just a quarter mile at a time, but I'm up to running 2.5 miles.  My mother in law came over Thursday and I got outside for a run and it felt great!!

I just signed up for my first post-baby race - Let's Move 5K in Mt. Clemens.  I was hoping to run this  half marathon for the third year in a row, but I know that's not realistic.  So, I talked my sisters, husband, mom, mother in law and various other family members to doing the 5K, too.  Selfishly, this way I know I'll have someone to push the baby in the stroller (or stay home with her if it's bad weather) so I can run my own race :)

That race is on April 27th, so I have six weeks to comfortably cover 3.1 miles and increase my speed in doing so.  Again, it's just like I'm a beginner again, which isn't all that bad, I just had to get myself in a different mindset.  One thing is for sure: I want to get my fitness back and be a good, active role model for our daughter.


﻿
Speaking of which, Lindsay is 8 weeks old and ready for summer: 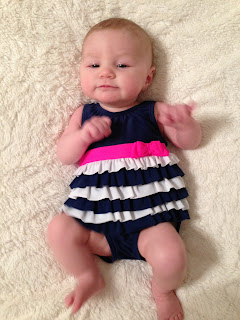 I HAD to but this bathing suit the other day as it is so cute (and I hate bikinis on babies).  Yes, there's still snow outside, but I couldn't resist.

Being a mom is great - the absolute best feeling in the world!!!  I go back to work next week (just Thurs & Fri), so we'll see how I do being away from her and keeping up on my running.  Wish me luck!
at 11:37 PM 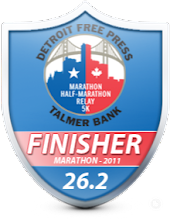